This article covers common questions asked about Algorand, a permissionless blockchain that works using the Proof of Stake consensus model.

Why does Algorand have a minimum balance?

Algorand is a special asset that has built-in rules on minimum balances held in Algorand addresses, just like some bank accounts where you have to maintain a minimum balance. In order to activate and use your Algorand wallet, you must first deposit no less than 0.1 ALGO into your Exodus Algorand wallet.

After that, your account will activate and everything will be just like you are used to with Bitcoin, Ethereum, or any other Exodus asset, except that the 0.1 ALGO minimum cannot be moved out.

The ALGO asset is unique in that, unlike other assets, Algorand enforces reserve requirements in order to keep the address active as well as protect the shared global ledger from growing excessively large as the result of spam or malicious usage.

Much like Stellar and Ripple, the Algorand network requires minimum balances on accounts in order to prevent people from overwhelming the network.

To submit transactions, an address must hold a minimum amount of ALGO in the shared global ledger. You cannot send this ALGO to other addresses. To fund a new address, you must send enough ALGO to meet the reserve requirement.

The current minimum reserve requirement is 0.1 ALGO. This is the cost of an address that owns no other objects in the ledger.

You can read more information on the Algorand reserve requirements in the official documentation.

Similar to how Exodus requires a minimum Ethereum balance to exchange ERC20 tokens, or a minimum balance for Ripple, Exodus also requires a small amount of ALGO to be stored in your wallet to remain in compliance with the Algorand enforced reserve requirements.

By default, a minimum balance of 0.1 ALGO is required, however for each Algorand Standard Asset (ASA) token (e.g. EXIT token) you opt-in to receive, the minimum balance will increase by 0.1 ALGO per token.

So, for example, if you have both ALGO and EXIT, your minimum ALGO balance will be 0.2 ALGO.

If your ALGO address in Exodus has less than this minimum balance, clicking on the "Receive" tab will display a modal (popup) with this warning to alert you of the situation.

Please note: You will not be able to send ALGO while the balance in your Exodus wallet remains below 0.1 ALGO.

When exchanging other assets for ALGO using the Exodus in-app exchange feature, Exodus will always make sure that you will receive more than 0.1 ALGO to ensure these account minimums are covered.

How is ALGO generated?

Algorand is generated in a very similar way to NEO with its GAS or ONT with its ONG. The Algorand rewards are earned by everyone holding at least 1 ALGO and earned proportionally to their holding of ALGO.

The first 6 million blocks have been divided into 12 reward periods. Each block is approximately mined every 4.4 seconds and rewards are calculated each block. Your rewards will be based on your current ALGO balance.

After these 12 periods, the rewards will just be the fee collected from transactions.

To find out more about what Annual Percentage Yield (APY) is and how to view the current APY for ALGO, please check out this article: What is APY.

How do I receive generated ALGO?

ALGO dividends are automatically calculated and sent to ALGO holders that are holding at least 1 ALGO. The dividends are proportional to the amount of ALGO. This is to benefit every token holder equally. Anytime you send or receive an Algorand transaction, you will automatically claim any unclaimed ALGO rewards. You can also claim your rewards directly within your Exodus wallet.

You can use this website to estimate the number of ALGO you will receive based on your current ALGO holdings: https://algoexplorer.io/rewards-calculator

As block times are approximate and can vary with network conditions, the ALGO received over time will differ from the estimates shown on this website.

Claiming ALGO inside of your Exodus wallet

Please note: You will automatically claim any unclaimed ALGO rewards anytime you send or receive an Algorand transaction. This feature is built into the Algorand blockchain.

1
Open up your Exodus wallet and head over to the Rewards app. 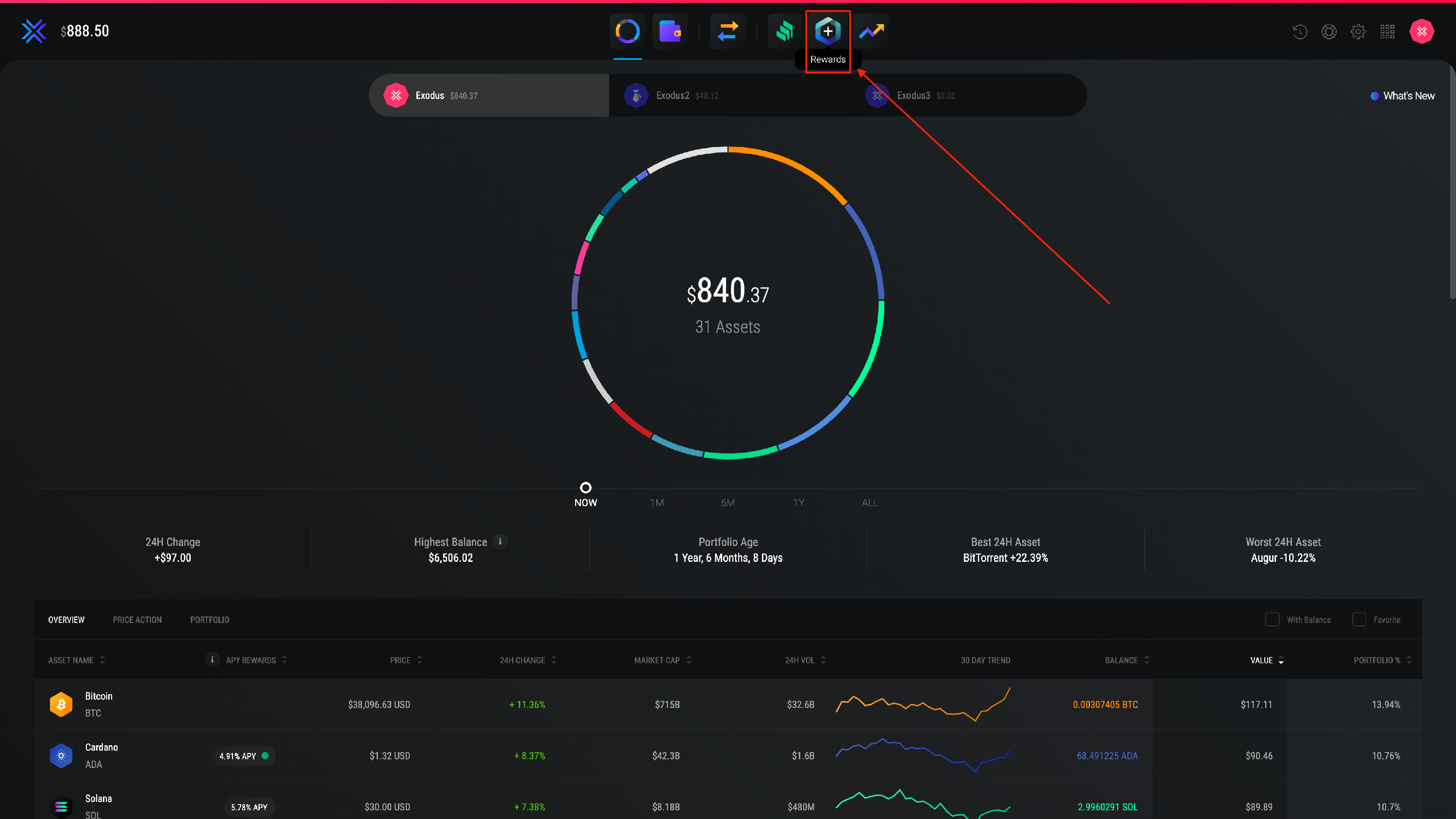 2
Navigate to where it says Algorand and then click on Get Reward. 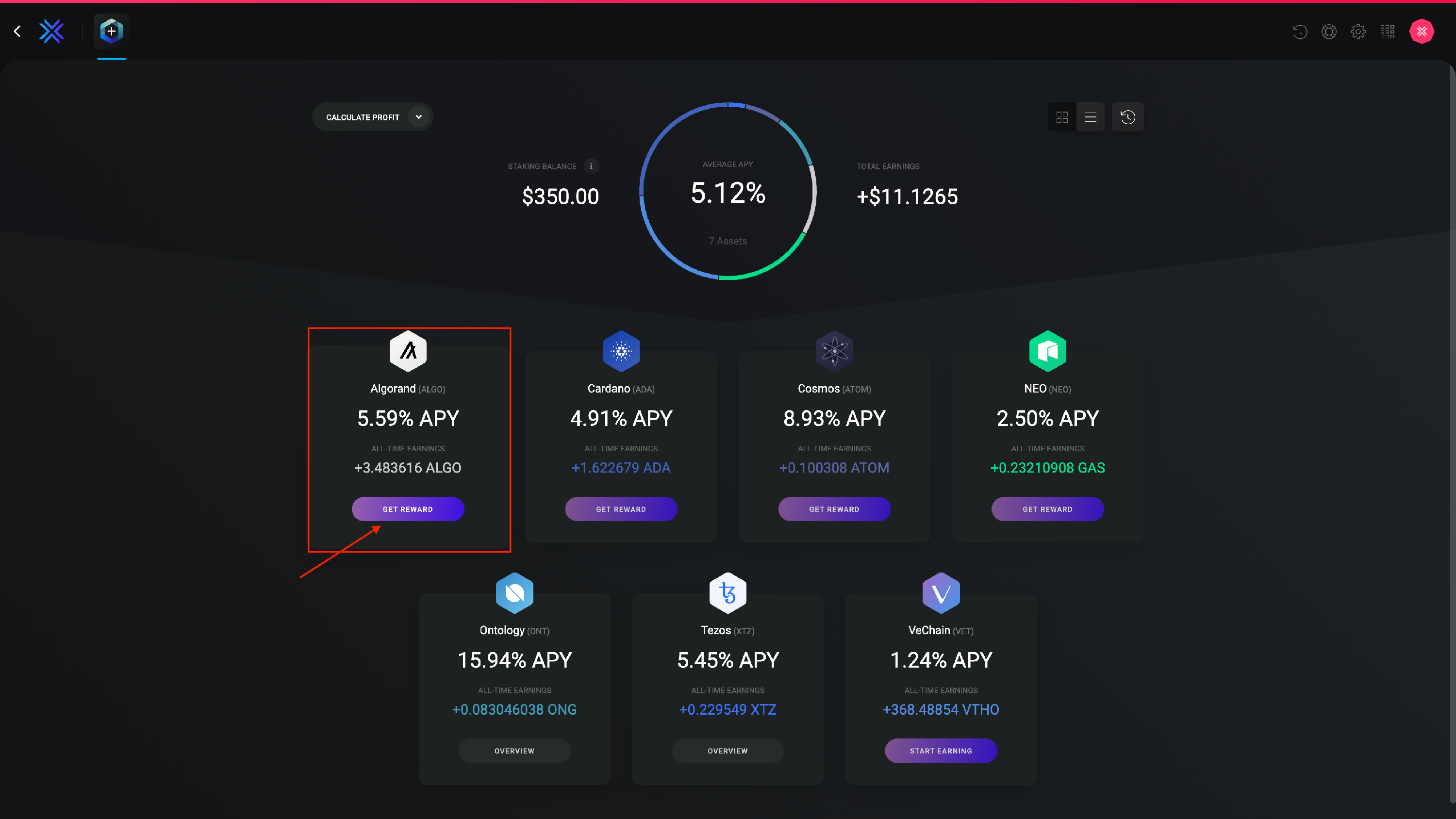 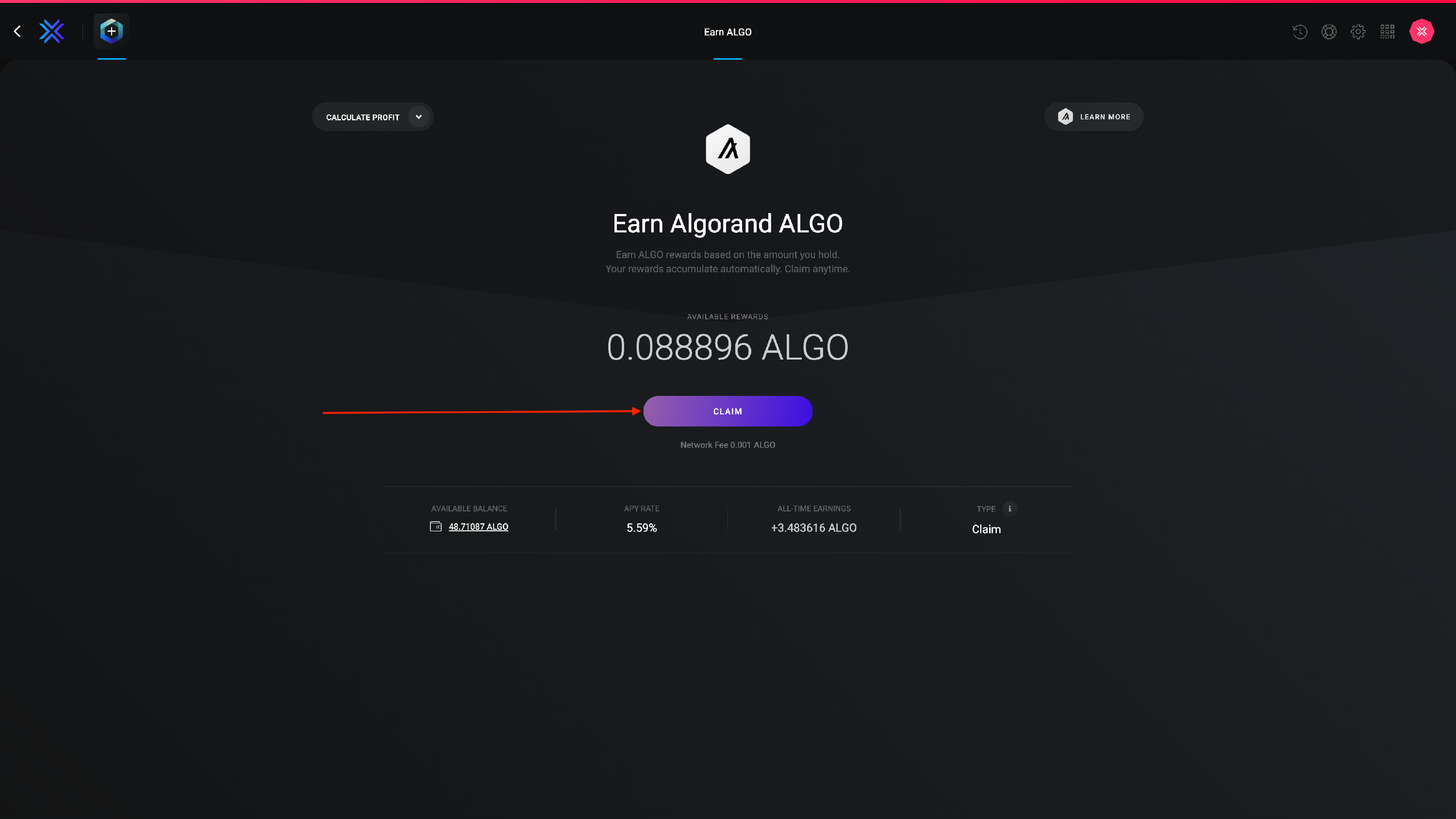 Just follow the on-screen prompts and you are done!