Neo N3 tokens will replace NEO and GAS. Not to worry, your legacy NEO and GAS funds can still be safely stored in your Exodus wallet.

If you choose to migrate your NEO and GAS, this will need to be done outside of Exodus. If you would like to migrate right away you will have to move your funds to a Neo N3 supported wallet in order to complete the process. This also means you will not be able to store your Neo N3 assets inside Exodus for the time being.

Please note: Migrating your NEO to the Neo N3 version could limit where you can store, sell, or trade your N3 NEO.

For more information on the Neo N3 Mainnet launch and the migration process, please visit:

NEO is a blockchain whose development was started by founders Da Hongfei and Erik Zhang in 2014. The project raised Bitcoin in a two-stage ICO in October 2015 and August 2016. Originally known as AntShares, the blockchain rebranded to NEO in the summer of 2017.

Once nicknamed "Chinese Ethereum" because of its smart contract capabilities, NEO is indeed similar to Ethereum (ETH) as they are both programmable public blockchains with support for smart contracts. However, NEO's design and technology differ from Ethereum. This is most noticeable in its consensus mechanism (an adaptation of Byzantine Fault Tolerance, which offers finalized, irreversible transactions in a single block) and in its NEO/GAS dual-token economic model.

Additionally, NEO tokens are indivisible (they exist in whole numbers only). Although fractional NEO can be bought and sold on centralized exchanges, only whole NEO tokens can be transmitted on the blockchain and held in NEO wallets such as Exodus Wallet.

GAS is the secondary token on the legacy NEO ecosystem - it was formerly used to pay for transaction fees for more complex transactions. It was also used to deploy and run smart contracts on the NEO blockchain. Unlike legacy NEO, GAS is divisible and does not need to be a whole number.

Previously, owning and holding legacy NEO in your NEO wallet generated GAS over time. Legacy NEO holders received a small amount of GAS for each NEO held in their wallet.

With the upgrade to Neo N3, the NEO network no longer supports GAS generation with the Legacy Neo (NEO) token.

Why am I no longer earning GAS?

Neo has migrated to Neo N3, which is a new unsupported asset in Exodus. With the update to Neo N3, GAS generation stopped at block 8 million of the legacy Neo MainNet, which occurred on September 19th, 2021. This means all legacy NEO holders will no longer receive GAS for staking their legacy NEO. While you will no longer earn rewards for your NEO legacy and GAS tokens, you can safely store them in Exodus.

Where do I see the GAS received by my Exodus wallet?

If any GAS was received by your Exodus wallet in the past, all you will need to do in order to see it is enable the GAS wallet from the settings menu. You can see how to enable assets in this article we wrote: https://support.exodus.io/article/101-how-do-i-enable-disable-assets-in-exodus

How do I claim GAS inside my Exodus wallet?

If you have some unclaimed GAS, in order to claim it all you need to do is head over to your NEO GAS wallet.

1
Open up your Exodus wallet and head over to the Rewards app. 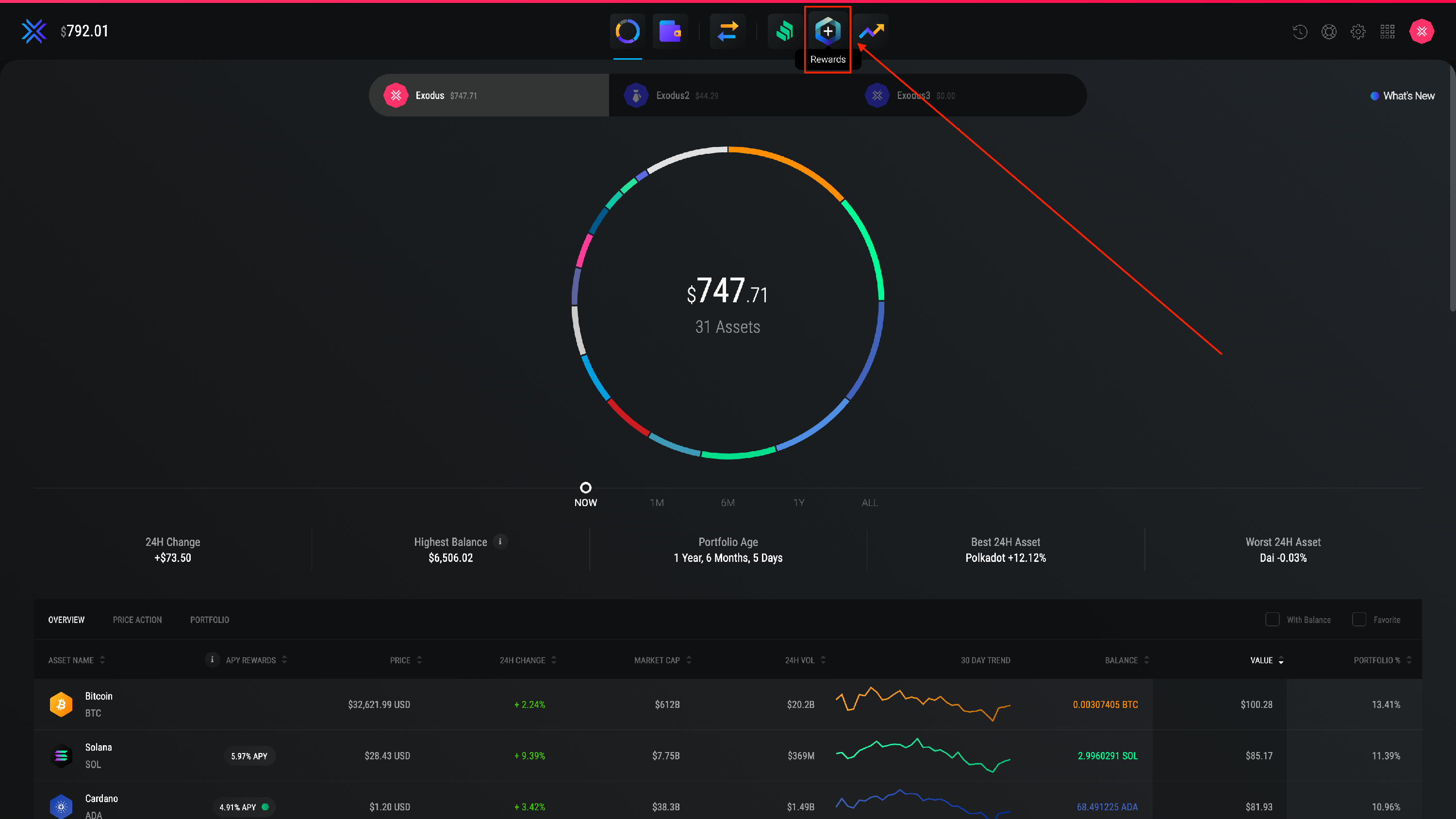 2
Navigate to where it says NEO and then click on Get Reward. 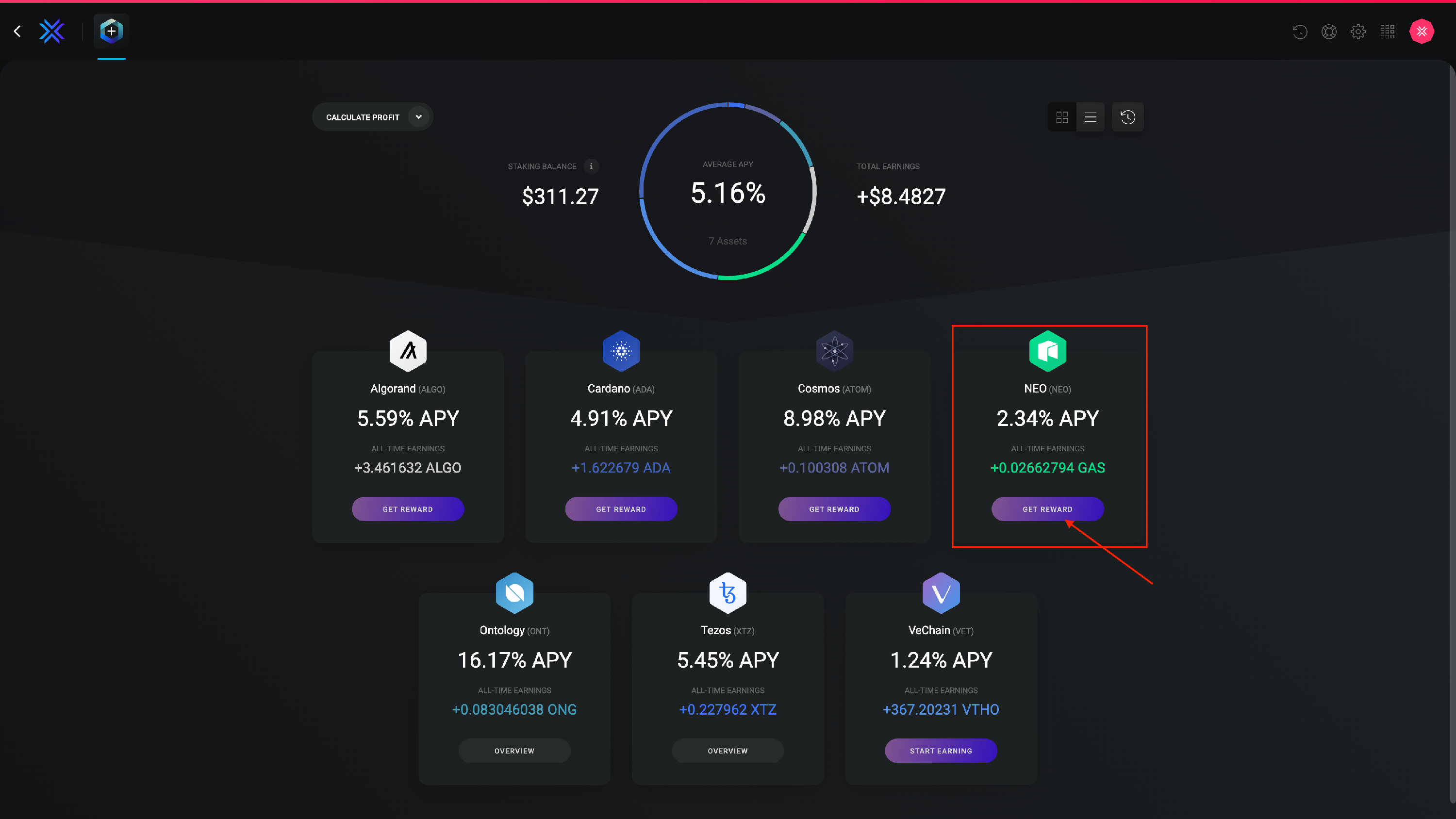 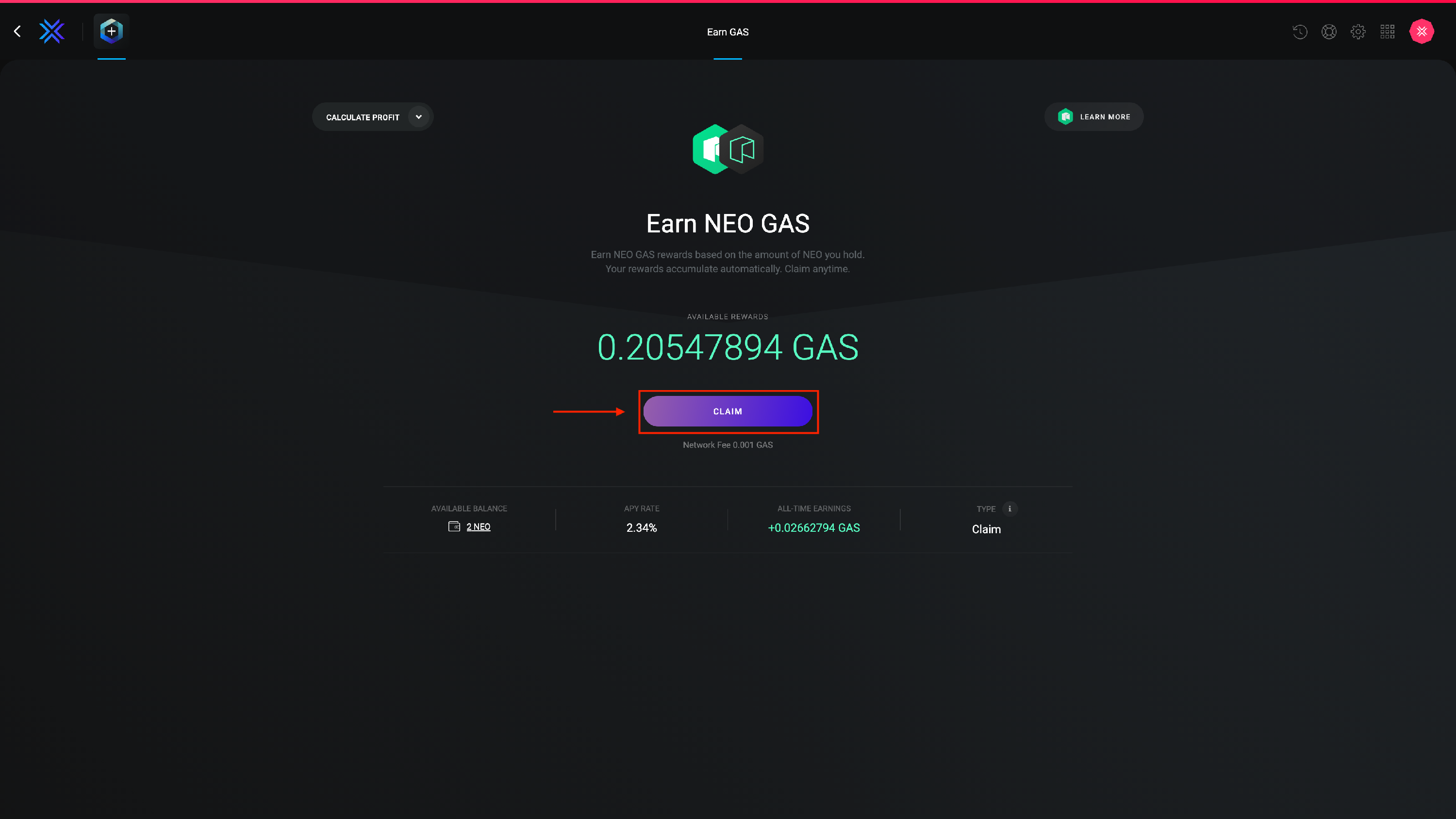 Just follow the on-screen prompts and you are done!

It will take around 5 minutes for your GAS to be available in your Exodus wallet balance.